The “Thing” About Radio And Cars 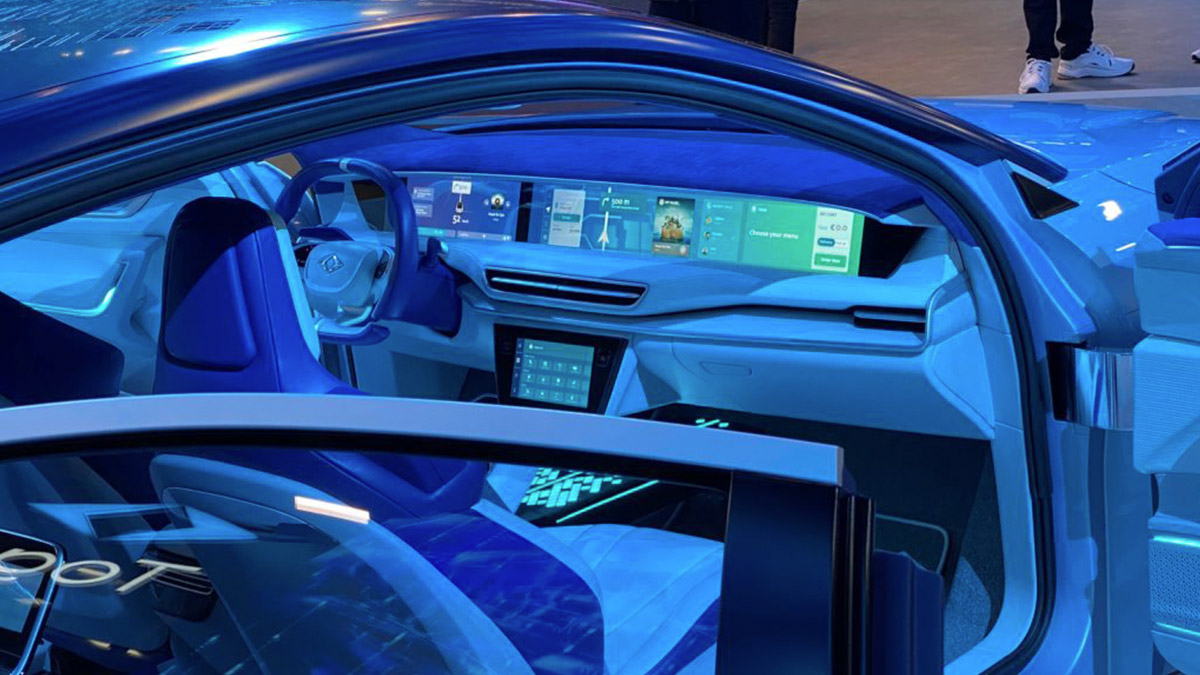 In my wildest radio dreams, I never thought being from Detroit would become a factor in my career arc.

Yes, I ended up programming in Detroit in the early 80’s at my hometown rock station, WRIF.  Don’t let anyone tell you that’s not an advantage.  When you know the market history, how music has evolved, the local venues, and of course, the people, you have a distinct advantage.  Could I have successfully programmed in L.A., New York, or Seattle?  I believe so, but my run in Detroit was aided and abetted by being a Motor City native.

Decades later, the Detroit factor kicked in again, after a trip to CES in 2009.  That’s when Ford CEO Alan Mulally had the keynote honors, introducing Ford SYNC, the first true dashboard ecosystem.  Mulallly would go on to three-peat at CES, also taking the big stage in 2010 and 2011.  It was clear to techies the car dashboard was now in a state of change, a phenomenon still going on today.

To most radio people, however, the message wasn’t getting through even just a few year ago.  Many of radio’s rank-and-file assumed an AM/FM radio would permanently dominate the “center stack” in cars and trucks in perpetuity.

By now it should be obvious: it won’t.

Last year at “virtual CES,” Mercedes-Benz introduced us to its “Hyperscreen” pillar-to-pillar dashboard display.  It run across the entire width of the car from the driver’s left arm to the passenger’s right.  We’re now seeing this style become a trend.  The Togg, pictured at the top of this post, is a Turkish entrant in the EV space.  You can see its dashboard occupies similar real estate in this beautiful new vehicle.

While watching “March Madness” the other night, I saw a TV add for the Mercedes EQS, equipped with the “Hyperscreen” option.  The “thing” about these dashboards is their ability to catalog and predict the driver’s preferences utilizing AI – Artificial Intelligence – as the algorithmic engine.  As we learned at CES, if you regularly listen to your “Metal Madness” playlist on Spotify every morning to fire you up for the workday, that’s what “Hyperscreen” will display for you tomorrow morning.   Yes, radio can still be accessed, but your new dashboard will favor the content you regularly access.

Radio listening has always been driven by habit.  But now, that pattern is being taken over by the car’s predictive qualities.  Radio’s front and center, prime placement in the dashboard is coming to an end.  Here’s the “Hyperscreen” spot.  Listen to how they refer to the vehicle’s (artificial) intelligence: https://www.ispot.tv/share/bVaT

“It listens, learns, adapts, and anticipates your mood.”

And then the other day, I got the shivers when Mike Stern sent me a missive from Spotify touting its “Car Thing” accessory.  It’s an aftermarket box that enables more seamless access to Spotify assets using voice – all for the low-low price of $90.  Can’t you essentially perform these same tasks by pairing your phone?  You can, but Spotify is pushing its unique selling proposition:

“Let your phone do phone stuff.  Car Thing has one job and does it awesomely.”

Like “Hyperscreen,” it is more technology that places barriers in between the driver and her favorite radio stations.

You’re probably wondering how long it’s going to take before “pillar to pillar” dashboards or add-ons like “Car Thing” will become ubiquitous – if ever.  With a price tag of $8,000 (for now) in just one EV model (for now), the answer is “Not anytime soon.”  But we’re seeing similar models showing up in other vehicles, like the Togg.  The auto business is every bit as much into copying the latest and greatest from one another as we are in radio.

And what about Spotify’s “Thing?”  For a much more affordable prices of $90, will it ever become a mass market hit, even among Spotify Premium subscribers in the U.S.?  Of their over 50 million paying customers in the States, if 10% buy “Thing,” we’re  talking 5 million on American roads.  From a broadcast radio standpoint, it wouldn’t be illogical to assume most of these consumers aren’t listening to a lot of FM radio anyway.

The big takeaway here is that tech improvements to the in-car media experience like Spotify and Mercedes-Benz’s new gadgetry are unstoppable, whether developed by digital creators, Tier Ones like Panasonic, or the OEMs  – the automakers – themselves. They also seek to keep drivers and passenger on their proprietary technology. The illusion is that the consumer has control of their content.  But the reality is that it’s all about the platforms, and keeping us locked in.

And we’re now at the point where mergers, acquisitions, and collaborations are in full swing.  While automakers were once cloistered laboratories, using only their homegrown technology, they now actively seek out technology partners to fill their gaps.  One of these is the billions the OEMs have been spending – OK, wasting – on trying to reproduce their own versions of dashboard features – apps, navigation, and other conveniences that simply don’t compare to the quality of these same functions on the average smartphone.

As they learned – the hard way – from the increasingly popular Apple CarPlay and Android Auto dashboard ecosystems – better to leave the tech to the technologists.  This is why Ford recently inked a 6-year deal with Google.  Now, the Alphabet-owned juggernaut will control infotainment and many other integrated features and systems in all Ford vehicles.

After trying – and failing with – both Microsoft and Blackberry/s QNX, CNBC reports Ford CEO Jim Farley (pictured) is ready to hand over his company’s in-vehicle technology to the big boys and girls who work for Google.

The partnership will allow Ford to deliver over-the-air updates to its vehicles “using artificial intelligence.”  If that sounds like a move out of the Tesla playbook, you’re following Ford’s logic path,  Here’s how Farley explained it to CNBC:

“One of the most important parts of our strategy is to partner.  That means that we have to get out of the business of doing generic things that do not add value, like navigation systems and a lot of the in-car entertainment experience.

This deep integration means all Fords will run familiar features such as Google Assistant (the voice engine), Google Maps, and other Android apps – regardless of whether you own an Android smartphone.

These developments continue to put pressure on radio broadcasters who increasingly are losing their grip in the dashboard ecosystem.  We’re in the process of preparing Techsurvey for an early April presentation for stakeholders, its debut at the AllAccess Audio Summit later in the month, followed by our all-industry webinar.  But I’m sneaking peaks at the data, and recently checked out the percentage of the in-car listening “pie” AM/FM radio continues to capture.

At 56%, a majority of four-wheel usage is to broadcast radio, but as the trended chart below clearly shows, that position is slipping.  Like a leaky tire, we’re seeing radio’s dominance slip – even among our core listeners who dutifully fill out our Techsurvey every year.  And given reduced time spent in cars due in large part to millions of Americans continuing to work from home, and the car becomes less and less of a primary listening location.

That underscores the importance of radio broadcasters doing their utmost to optimize the in-car listening experience.  While perhaps a subtle advantage, audio processing still makes a difference, especially when a consumer is moving from platform to platform – like SiriusXM to most FM music stations.

Perhaps more noticeable is a station’s digital dash display, driven by how its metadata is strategized and programmed.  Techsurvey 2022 has new data ready to go that quantifies how album artwork and other dashboard data is perceived by drivers…and passengers.  You’ll see it soon.

While audio content is obviously the deciding factor in how entertainment options are prioritized and selected – and American radio has a tough challenge in that respect – minding its metadata is a way broadcasters can control the controllables.
That’s the topic of a panel Paul Jacobs and I will be hosting at the NAB Show next month in Las Vegas.  “A GPS Session For Your Station’s Car Radio Strategy” will feature key data points from Techsurey, of course, but our guests will bring their expertise to our session.  Lesley Rohrbaugh (pictured) is the director of research of the Consumer Technology Association, the organization that produces CES.  Lesley will provide the 35,000-foot view of the automotive sector, as well as what’s coming down the road in the industry. Jacobs Media conducted video Zoom interviews about dashboard display preferences.  Quu is now using these results to better educate radio broadcasters on “best practices” for a radio station’s dashboard display.  Suzy will be showing some of those revealing video clips, as well as updating attendees on what’s in the pipeline for Quu.

And finally, there’s Xperi whose new dashboard platform AutoStage (pictured) will be on display in the exhibit area.  Available now on some Mercedes-Benz models, the way radio looks in AutoStage is the best we’ve seen.

The “Wow factor” is important in the auto industry, helping drive purchasing decisions.  Looks aren’t everything, but how radio appears in cars is one of the key factors that shapes perceptions as drivers move from listening platform to listening platform.

We’ll try to sort it out for the thousands of broadcasters from the U.S. and around the world in attendance for the industry’s coming out party.

Hope to see you there.

Information on our NAB Show panel, “A GPS Session For Your Station’s Car Radio Strategy” is here.