Broadcasters Conspiring in Their Own Demise 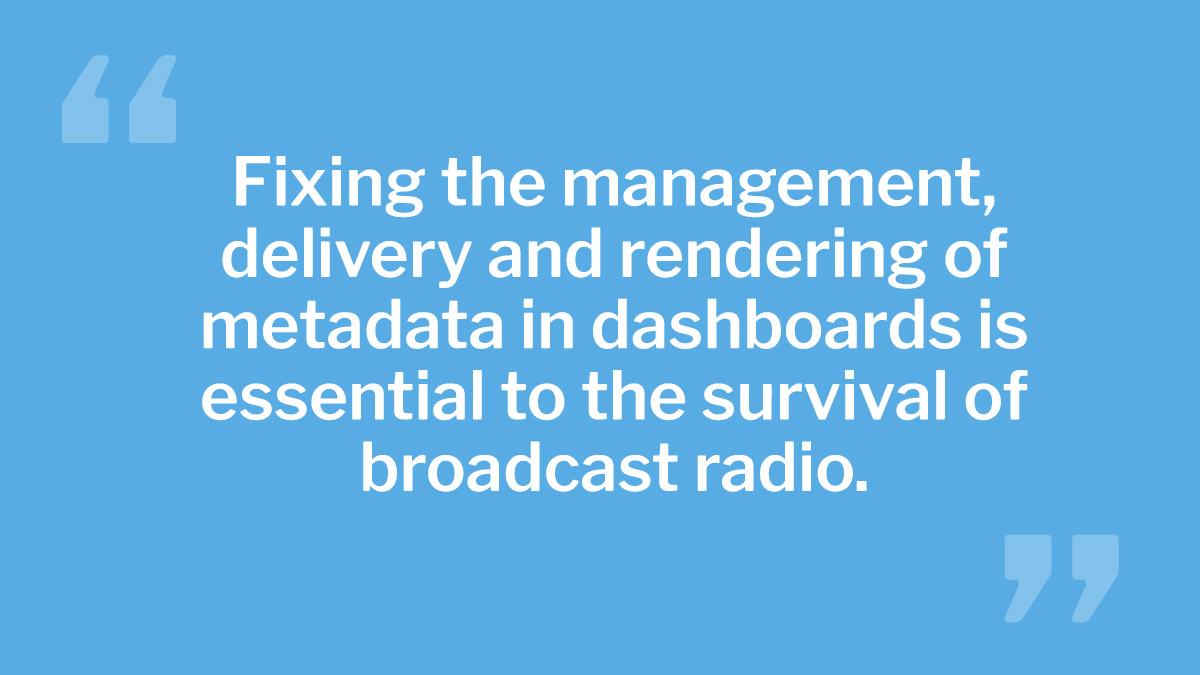 To survive, radio must fix its management of metadata in dashboards

The author of this commentary is a director in the Global Automotive Practice at Strategy Analytics.

Just a few years ago, Jacobs Media Strategies conducted a study for the National Association of Broadcasters identifying the critical shortcomings facing the broadcast industry in its management and delivery of metadata for its content and advertising.

To its credit, the NAB sought out Jacobs to conduct an audit of digital station content as rendered in automobiles to assess the varying levels of digitalization across the radio dial.

Conducted about four years ago, the Jacobs audit was carried out in three markets and found significant shortcomings in the availability and rendering of metadata in vehicle infotainment systems.

The mere fact that such a study would be conducted at all was clear validation and recognition of the primacy of in-vehicle radio listening.

Just as radios of all kinds — clock radios, boom boxes and Walkman-style portables — have all but vanished, automobiles have increasingly become a key focal point for consuming audio content, second only to smartphones.

Most estimates suggest that in-vehicle radio listening today accounts for 50 percent or more of all radio listening, at least in the U.S. This figure is generally seen as somewhat lower outside the U.S.

The NAB has long recognized the importance of car radio listening — especially after witnessing the rise of SiriusXM, which has built one of the world’s most successful and largest networks of subscribers almost entirely upon and through its relationship with auto makers. Rare is the automobile in the U.S. that doesn’t leave the factor or the dealer’s lot equipped with SiriusXM satellite radio.

The importance of the listening experience in the car is twofold. The listener in the car represents a captive audience — seatbelted in place and focused on the driving task. The infotainment system, previously known as the car radio, is the focal point for content consumption in an environment designed to mitigate distraction.

The big change that has thrust metadata to the forefront, though, is the reality that the “car radio” as we once knew it is gone. There is no radio dial. There is now an increasingly large digital display and a built-in wireless connection.

At the same time, Strategy Analytics research has shown that even though radio listening in the car is king, content consumption more broadly considered is increasingly fragmented. This experience is global and reflects the introduction of app-centric in-dash systems and smartphone mirroring.

The Jacobs Media audit highlighted the magnitude of the problem on the ground in cars on the road today.  Jacobs concluded:

In its report, Jacobs Media highlighted these failures with images from in-dash displays.

Four years later a company, Quu, has emerged to directly engage with broadcasters to help overcome the overwhelming metadata shortfall that persists to this day.

This matters because in today’s in-dash systems the radio is no longer the default screen. Drivers and passengers have to search for the radio, and may not even recognize it when and if they find it.

Quu is directly taking on this challenge, as is Xperi.

The latter has emerged on the metadata scene — actually Xperi has been toiling for the past 15 years to stitch together the back-end infrastructure now capable of delivering what can only be described as radio-as-a-service, or RaaS.

Xperi’s Raas platform, DTS AutoStage, aggregates station, artist and genre information suitable for in-dash display clarifying the consistent appearance of what a connected radio should look like while simultaneously enabling non-linear listening with search and program guides along with the ability to integrate events and interactive advertising opportunities, from organizations such as Instreamatic.

Xperi is perhaps best known as a digital radio advocate, with particular emphasis on HD Radio. But the scope of AutoStage is sufficiently transformative that it is enabling a redefinition of the concept of hybrid radio (a combination of streaming and broadcast) pioneered by Audi.

It’s true that each automaker has its own idea about what radio should and will look like in the car. At least with Xperi, automakers can start with a consistent look and feel applicable across the globe and capable of integrating analog and digital broadcast sources and rendering them in a familiar fashion in any car.

The weakest link — as demonstrated by Jacobs Media in its NAB audit and still in evidence today — are the broadcasters, many of which have yet to remedy the shortcomings in their metadata strategies.

As radio listening declines in automobiles — a phenomenon that Strategy Analytics has documented from consumer surveys conducted over the past 10 years across China, North America, and Europe — broadcasters will have no one to blame but themselves for that fading signal.

The message from the Jacobs Media study, from Quu, from Xperi and from Strategy Analytics surveys and customer clinics is clear: Fixing the management, delivery and rendering of metadata in dashboards is essential to the survival of broadcast radio.